The period of Reconstruction, which begins in 1865 after the ending of the Civil War, is a post-war moment when the United States – both the general population and its elected officials – works to establish a government and laws that pay heed to the ending of slavery.

A book about African Americans in Florida during Reconstruction is available online (it was published in 1965): The Negro in the Reconstruction of Florida, 1865-1877.

The Strategy of the Vote

After the Civil War, blacks immediately begin organizing for the right to vote. They participate in networks of mutual aid societies, fraternal orders, churches and other organizations and holding secret get-out-the-vote meetings. When blacks achieve the right to vote, they vote in large numbers at every opportunity.

White Floridians who had taken up arms against the U.S. are denied the right to vote, which gives black voters a distinct but temporary voting advantage. In Florida, citizens vote educated blacks into public office. African Americans start businesses and open schools.

Florida has a black congressman, black constables and sheriffs, and a black Secretary of State (Jonathan C. Gibbs) who contribute to improvements in public education. Together, these leaders defy representations of blacks as incapable of leadership, integrity and intelligence.

The civil rights afforded blacks during Reconstruction help them challenge a white supremacist system that depends on blacks to support and protect white property and assets.

Immediately after the Civil War, Southern states capitalize on a loophole in the Thirteenth Amendment, which bans slavery and indentured servitude “except as a punishment for crime whereof the party shall have been duly convicted.”

Lawmakers demand a legal framework—the black codes—for preserving white supremacy and maintaining free or cheap plantation labor regardless of the ban on slavery. These codes establish in law the borders that blacks are not meant to cross.

These codes institutionalize differential treatment towards blacks and whites. Governor Benjamin Humphreys of Mississippi argues that blacks might now be free, but they are not guaranteed political or social equality, and that a racial caste system is necessary to maintain the “purity and progress” of both races.

View the documentary below (13th) in order to understand the loophole of the 13th Amendment and how its legacy is reflected in the criminal justice system of today.

The Southern Homestead Act of 1866 is meant to distribute land to freedmen and pro-Union Southern whites (72); In Florida, 2,012 African Americans receive land this way. 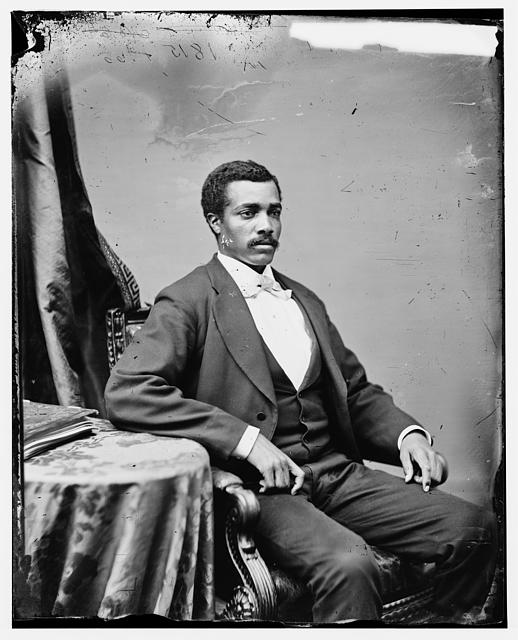 One of the teachers at the Freedman’s Bureau is Josiah Walls, who was born into slavery in Winchester, Virginia, on December 30, 1842. Forced to become a servant to a Confederate artilleryman during the Civil War, he is captured by the Union in 1862 and emancipated.

Walls serves in the United States Colored Troops 3rd Infantry Regiment in 1863: a regiment that moved to Northern Florida. He is initially stationed in Philadelphia, but in 1864 his regiment moves to Northern Florida. Walls uses the money he has earned at the Freedmen’s Bureau to purchase a farm and get involved in politics. After serving as a delegate for Alachua County to the 1868 Florida Constitutional Convention, he is elected to the Florida State House of Representative and the Florida State Senate.

In 1870, the Republican party nominates Walls to represent Florida in the United States House of Representatives. Facing off against Walls in the election is Silas Niblack, a former slave owner and Confederate veteran. Walls challenges Niblack to a debate and begins a public speaking tour of Northern Florida.

Walls wins the election. As a Congressman, he advocates for internal improvements in Florida, a national system of education, and pensions for war veterans.

The Strategy of Intimidation

The Ku Klux Klan intimidates many new black landowners into abandoning their properties or selling them to whites, including those who had sided with the Confederates. For instance, KKK members beat a black Florida landowner, rape his wife, cripple his infant son, and destroy his home. The white attackers are acquitted, but the black landowner and his wife lose their property in court, and are then themselves convicted for perjury against their attackers.

The Emergence of Black Districts in Florida

After the Civil War, newly emancipated African Americans migrate either North or into southern cities. Often they live on the outskirts of town or in areas that are undesirable to whites due to poor drainage or location. Whites make significant profits from dividing and selling plots of lands to poor African Americans.

Often, these districts contain substandard housing like shacks, and have barriers and boundary markers such as railroad lines or rivers (think of the term, “on the other side of the tracks”). These barriers are all that separate black districts from white areas. In Florida, after the Reconstruction era, new black districts are formed after white housing begins to surround existing black districts.

The Strategy of State Rights

Before it ends in 1877, Reconstruction brings legislative achievements including:

Nonetheless, both the original Constitution and the Fourteenth Amendment delegate to the states the right to determine the qualifications of voters and to disqualify anyone who participates “in rebellion, or other crime.” This exemption has long been used to exclude felons and ex-felons from the right to vote.