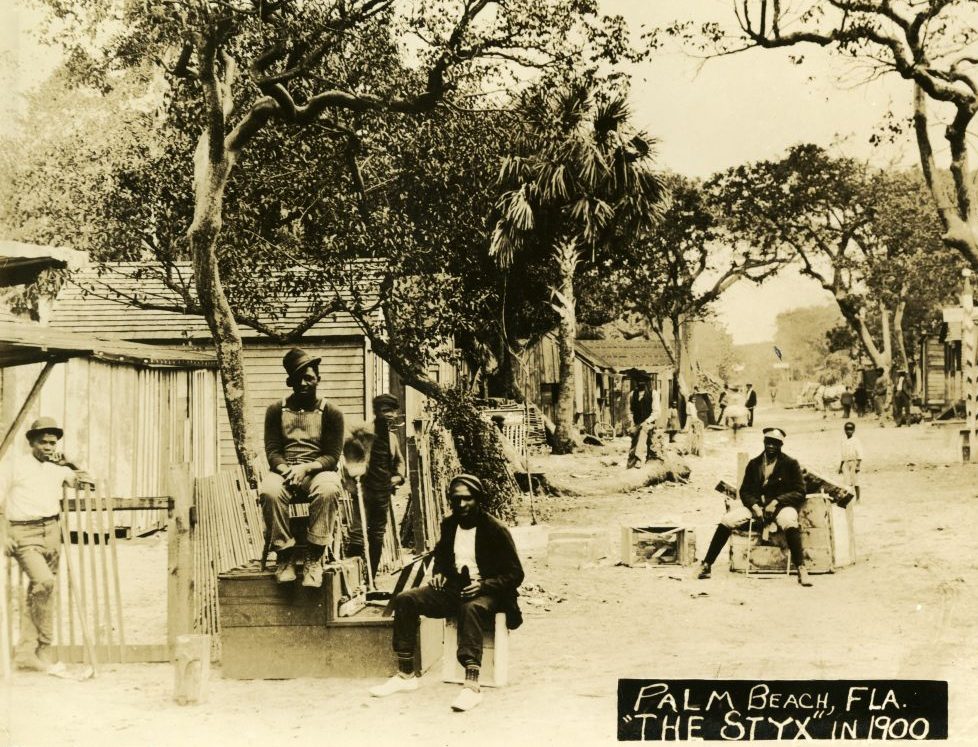 Palm Beach County is still part of Brevard, St. Lucie and Dade counties in the second half of the 19th century; it is not established as a separate county until 1909.

Miami and West Palm beach become Florida’s two largest urban centers. Blacks from the Deep South are recruited to work the farms in Florida’s agricultural areas. Those who live in rural areas usually live near whites or in shanties on white-owned farms, always under the surveillance of white authorities.

Flagler decides to build two hotels, The Breakers and Royal Poinciana, on the island of West Palm Beach. These hotels are built by black laborers. 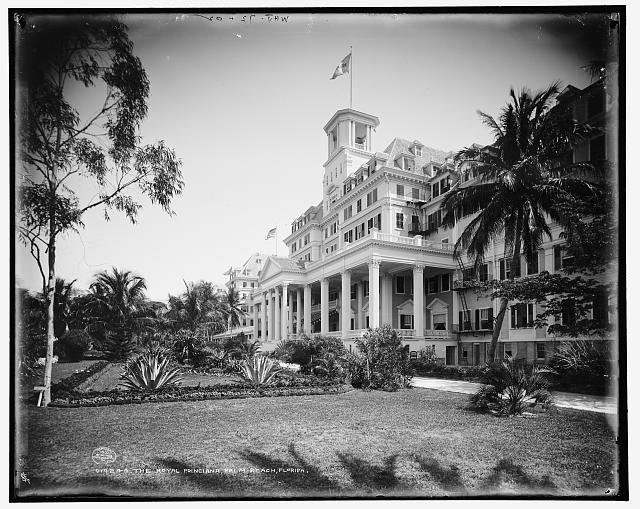 Photo of the Royal Poinciana Hotel, circa 1902. Library of Congress Prints and Photographs Division.

An estimated 2,000 African-Americans work at the island’s hotels, estates, and golf courses. “It was black laborers and their families they hired,” says Everee Jimerson Clarke, when interviewed by the Palm Beach Post. “There were ads in the Philadelphia papers and across the South. They came down by boat from Jacksonville.

These workers were not always paid right away, however, as this clipping attests:

From the early 1890s until about 1912, as many as 2,000 African Americans live in an area known as the Styx, a settlement near what is currently the intersection of North County Road and Royal Poinciana Way. This site is near Flagler’s two hotels: the Royal Poinciana and the Breakers. Like other black areas near urban centers, it lacks adequate services.

According to Clarke: “Flagler never planned to have workers living on the island, black or white. But when the building was all done, the whites still had a need for them. The service, the menial work — that was black.” Most tenants of the Styx are single men or heads of households who stay in town during the work week but have families living in the area that becomes West Palm Beach.

In the southeastern section of Lake Worth in Palm Beach County, Samuel and Fannie Jones, a black couple, own most of the town named Jewell. They obtain a federal patent and settle there in 1890. Fannie Jones is the town’s postmaster until 1912, when postal officials remove her from her post.

1894: The City of West Palm Beach is Founded

The City of West Palm Beach is founded on November 5, 1894. It is the first incorporated municipality in Dade County and in Southeast Florida.

In some accounts, a fire takes place in 1894 that burns the Styx (or a portion of the Styx) to the ground. One of the original settlers of the Styx is Flora Curry Storr (1874-1921), a Bahamian native. When work is completed on the Royal Poinciana resort in 1894, she finds her home has been set on fire. She and her family march across the bridge to the segregated mainland neighborhoods in newly designated West Palm Beach.

A portion of the southeast corner of an eighty-acre parcel (purchased by George L. Marsteller of Charleston, South Carolina, in 1884 for $100) become the Lakeside Cemetery, a racially integrated facility–rare during this era. It is located at South Dixie Highway and South Olive Avenue.

In Palm Beach, the tradition of Spring Training begins when black baseball players from the Breakers and Royal Poinciana hotels entertain the rich white islanders.

1902: A Storm, a Black Cemetery, and the Growth of Black Churches

A storm destroys the Tabernacle Missionary Baptist Church, which is now located in West Palm Beach at 802 8th Street. It is rebuilt and in the years to come it survives severe damage by Hurricanes Frances and Jeanne and its wood-paneled ceiling, stained-glass windows and other historic features are restored.

Congregants at Tabernacle Baptist Church include educator U.B. Kinsey, for whom the county public school is named, and attorney Gerald Williams. In later years, visitors to the church will include Susan Taylor of Essence magazine, the cast of Showboat, attorney Johnnie Cochran, Dr. Cain Hope Felder of the Howard University School of Divinity and many others.

Payne Chapel AME church becomes known for its elite, well-heeled congregation, with many moneyed African Americans among its congregants.

The Lakeside Cemetery Association purchases two acres from West Palm Beach to serve as a separate cemetery for African Americans. It plats 190 lots and inters approximately 100 people by 1913. The cemetery is simply called the “Colored Cemetery.”

Meanwhile, the Styx has become a place that some want to go away, as this clipping from Feb 26, 1903 documents …

The New Enterprise, a newspaper in Madison, Florida, documents the wishes of those who want to “wipe from existence” the Styx community.

According to urban legend, in 1910 the railroad mogul Flagler starts a rumor that spreads throughout the Styx. African Americans hear that they’ll receive a free ticket to a circus that is coming to the mainland. When they are away, their homes are burned to the ground. Some historians dispute this account.

What can be verified is that in 1904, local police begin a project to “clear out” African American residents of the Styx, as mentioned in this newspaper clipping from the same year: 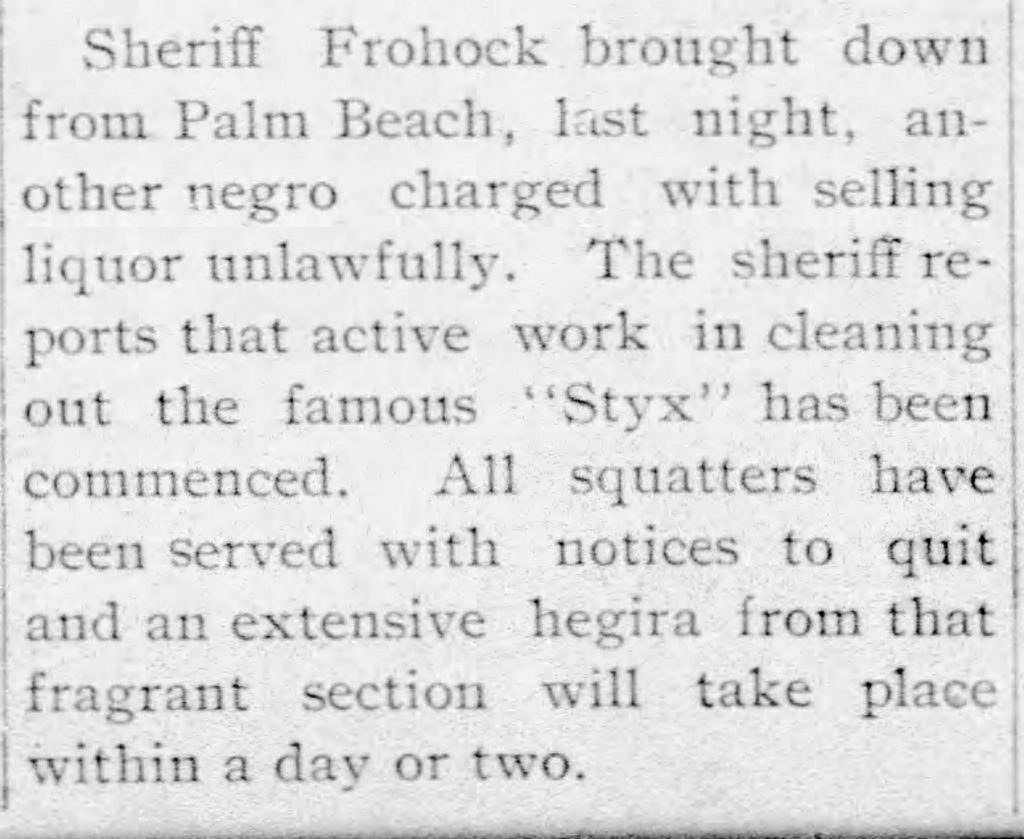 Fires in the Styx were indeed taking place in 1904, too–and the fire department was not putting them out: 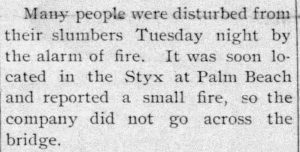 According to T.T. Reese Jr., whose father was director of the landmark Beach Club casino, the Bradley brothers (proprietors of the casino) bought up the land on which the Styx was located. In February 1912, they divided the area into 230 residential lots. Reese’s father was ordered to “clear the neighborhood.” In a letter to the Palm Beach Post sent in 1994, Reese Jr. wrote, “I remember watching the squatters and their belongings going across the old wooden bridge with handcarts and other carriers. After everyone had vacated the property, my dad brought in gardeners from the Beach Club and cleared the land, piled up the trash, and burned it on the spot.”

Meanwhile, a Palm Beach city ordinance forbids anyone “of the negro race” from living in town south of the Lake Worth inlet. Palm Beach becomes a winter haven for wealthy whites.

In the early 20th Century, African Americans — most of them women — are traveling to Miami to become certified as teachers. African American teachers offer classes at the West Palm Beach Colored School. In July of 1905, however, the original school is ordered shut down and a new school is planned for the newly created African American neighborhood of Pleasant City. White taxpayers also order the creation of a special tax district.

Arresting African Americans helps boost revenues for city coffers and also served as a way to procure free labor. African Americans are arrested on charges like vagrancy, public drunkenness, or gambling, but similar charges are rarely directed towards whites.

When reading the clipping from The Miami News below (from the Mar. 16, 1905 edition), keep in mind that black laborers earned about 40 cents a day at Flagler’s hotels, so a fine of $15 is equivalent to a week’s wages. Those who cannot not pay these fees are told they’ll need to work in the “rock pit” for two months. 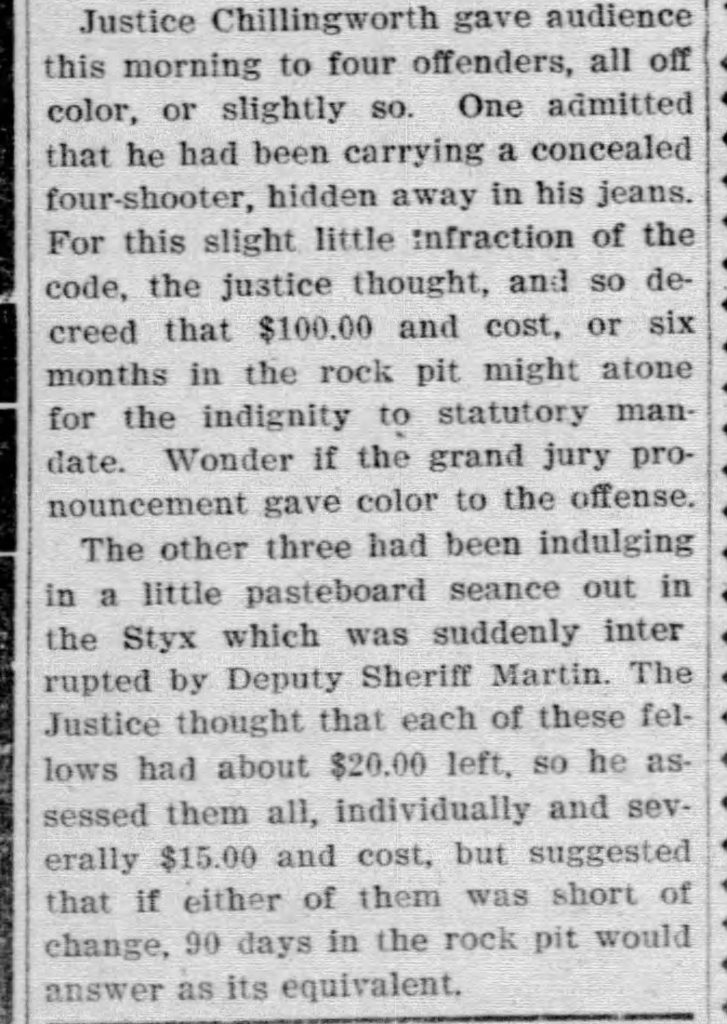 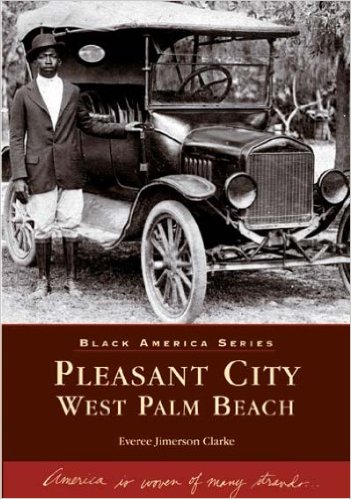 Long before the 1912 eviction, White West Palm Beach attorney and developer and former mayor George Currie begins planning for a “colored” neighborhood in West Palm Beach: a subdivision running from 15th Street on the south to 23rd Street to the north, with Dixie Highway on the east and the Florida East Coast Railroad tracks to the west. He calls it Pleasant City.

The sudden influx of families transforms Pleasant City into a hub of black life and commerce. A Currie Investment and Title Guaranty Co. ad in the Palm Beach Post of December 4, 1913 describes Pleasant City as “a high class, colored sub-division north of town.”

“He gave the streets names like Merry, Cheerful, and Contentment because, he said, the Negroes were naturally happy people,” according to Everee Clarke. “Nobody gave it to us, though. We bought it.” Pleasant City has its own school and its own marching band, which parades on special occasions.

Another black neighborhood is Northwest, from roughly Second Street to 11th Street; Rosemary Avenue west to Tamarind Avenue, developed from 1915 to 1941. Some define the neighborhood as between 23rd Street and First Street on the north and south and the FEC and CSX railroad tracks on the east and west.

Many black professionals move west to Coleman Park, a former pineapple farm. It combines older Lincoln Park and Tamarind Park neighborhoods and runs from Palm Beach Lakes Boulevard up to 23rd Street, and east-to-west from the Florida East Coast Railway tracks to the CSX Transportation tracks.

Industrial High opens at 800 11th Street. It is the first (official) African American high school in Palm Beach County, housing grades 1 through 12. The school becomes famous for its motivated teachers, its excellent music department and its championship athletic teams.

The City of West Palm Beach attempts to repossess and resell “the Colored Cemetery,” but it is blocked by the Florida Supreme Court.

In 1917 he built the house shown below (his home), as well as a rooming house across the street. Decades later his home, located at Division Avenue and Fourth Street in the Historic Northwest neighborhood, was added to the National Register of Historic Places. 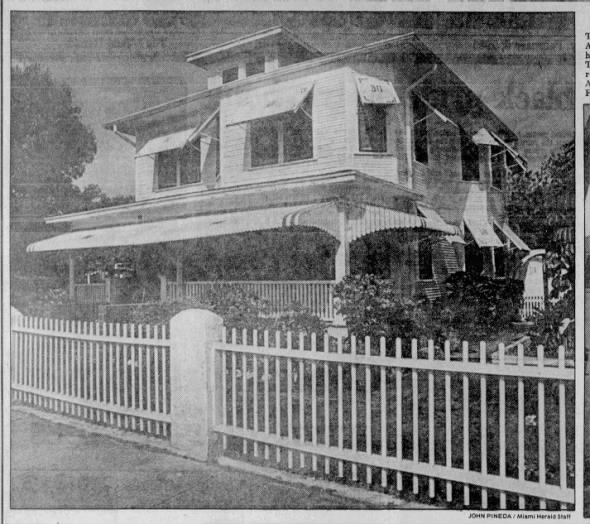